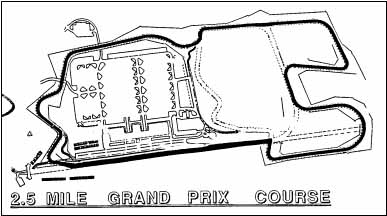 A few Z’s were definitely in order after driving all night. Doug stretched out on a table in the concession stand. Dennis tried to get comfortable in the passenger’s seat. He no sooner fell asleep than someone tapped on the window - time to run again. Dennis had been re-seeded to the second group based on the MIS performance.

The track was wet - very wet - standing puddles and small rivers. And no one had time to walk the track. The Mallets running in the first group came in after two laps, claiming that someone had waved them in. In fact, this gave them two practice laps and some time for the track to dry out. The first group was allowed a rerun, but the track was still wet. One Mallet spun into the mud and was stuck for about a half an hour before he could be pulled out.

To even things out, group two was given two practice laps. The RENNtech E60 lost it coming onto the straightaway, which also serves as a dragstrip, and smacked the wall with his nose. Apparently, the drag traction compound is pretty slick when mixed with water. It took another hour to clear the track and get things under way again. The first speed trial was completed without further incident, but the second speed trial was cancelled due to the delays and the weather.

Dennis demonstrated that MIS was no fluke, placing third overall behind the #10 Lamborghini and the #7 Porsche.

After Heartland the Superformance was second overall and still first in class.

No rest for the weary, however. West from Topeka across Kansas to Colorado Springs, 547.6 miles to Pike’s Peak.